These definitions clarify the concepts discussed on this page.

Miter joints and butt joints have identical miter angles; only the bevel angle is different. We can see this in the picture on the right; the cutting lines on the face of the board are parallel.

Angle Precision: Choose the number of decimal digits you would like to round the angle results to. 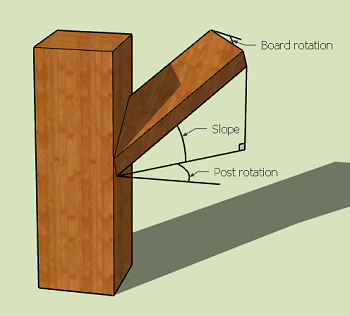 A board with a slope in the long direction intersects a vertical post which is rotated a certain angle.


If your slope or rotation goes in the opposite direction than shown then use a negative angle.

If the board rotation is 0° then the cut can be done without math. Set the blade tilt to the post rotation angle and the miter gauge to the slope angle, then put the board on edge (roll the board 90°) on the saw. 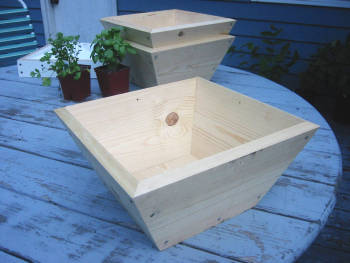 An n-sided box is built from n identical side pieces and a bottom. The box can have sides that are slanted outwards. The outward angle is the side angle.


Note that this calculator also works for rectangular boxes.
Derivation


The side slope is measured from horizontal and can be used to calculate any cuts needed at the bottom of the pyramid's sides.

Pyramids with butted joints are some weird animals. A few more or less realistic examples are shown on the right. 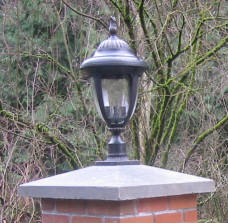 A concrete form for casting post caps can be made in the shape of a pyramid. The pyramid can have a square or rectangular base.


The side slopes are measured from horizontal and can be used to calculate any cuts needed at the base of the pyramid.

In geometry, a frustum is similar to a prism, but the sides are not parallel. This example has a base and a top with different aspect ratios.


The side slopes are measured from horizontal and can be used to calculate any cuts needed at the base and top of the frustum.

Both the inside and outside surfaces line up in this model, on account of the bevel angle being the same for all pieces. This works well as long as there is an opening at the top. Once that opening closes, we must make additional cuts to clear interference between the pieces. The mitered joint Rectangular Pyramid model does not have this limitation. If you want to try this model with a pyramid, set both top dimensions to zero.

The platonic solids is a group of five polyhedra constructed with identical sides.

In the general case we have two intersecting surface planes. By defining four points, 0 to 3, on the surfaces in 3D space we can find the miter and bevel angles of sides A and B.

The figure on the right shows the two pieces assembled. The dashed lines show how the XYZ coordinates for point 1 are determined.

Points 0 and 1 lie on the seam between the two surfaces. Point 1 can be located anywhere along that seam except at the origin (point 0).

The line between points 0 and 2 is the reference edge for surface A's miter angle. Point 2 can be located anywhere along that edge except at the origin. Line 0-3 likewise for surface B.


For the mitered joint, for simplicity the blade tilts for pieces A and B are the same, but you can change them as long as their sum is the same. This will affect the intersection of A and B at the top and bottom. For the butted joint the blade tilts must be the same. 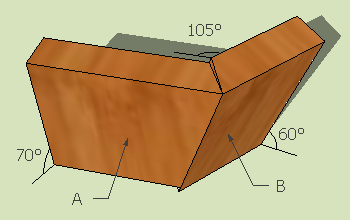 Two boards have been joined at arbitrary angles. We orient the joined boards such that their edges are parallel to the horizontal plane. We now specify three angles:

Flip Board On Edge

The calculators on this page assume that the boards are laying flat on the saw table. Sometimes we would like to have the board lay with its narrow side down instead. Specifically, we flip the board so that the surface that was facing away from us is now facing up. See the example on the right for how the signs of the angles are defined.

To use this calculator, either first use another calculator above and the inputs will be filled in automatically, or enter values in the input boxes manually. For the simplest case, just one blade tilt and a miter angle are needed.

The following methods may be useful for orienting the board for the compound angles.

If we want to lay out several pieces to be cut on a board, then we need to know the effective longitudinal kerf which will add up considerably over a few workpieces.

Most of the drawings on this page were created with the 3D drawing program Sketchup. Sketchup is useful for drawing a project and then measure the compound angles. Especially the bevel angle is rather difficult to measure though. Keep in mind that the bevel measurement must be perpendicular to the edge on both surfaces. Draw two short lines to help with the measurement, and check squareness to the edge with the protractor tool (see white squares). You may need to align the axes with the edge. It is very easy to get the bevel measurement off just a little bit by not squaring it up. Move or copy the lines out in the open and draw a line between the end points. This creates a triangle surface on which we can measure the angle between the lines. The bevel angle is then this angle minus 90°.

Credit goes to Chris Glad for being the first to provide an online calculator for butted joints. It is well worth it to check out his calculator.