Derivation of Equations for Compound Angles in the N-sided Box

This page is for those of you who are interested in how I arrived at the equations used in the N-sided box calculator. The equations can be found in the javascript section of the calculator's html file.

I found the original equations at the now defunct Scarletta site, and I became curious about how they were derived. I could not find any clues anywhere so I set out to derive them myself. 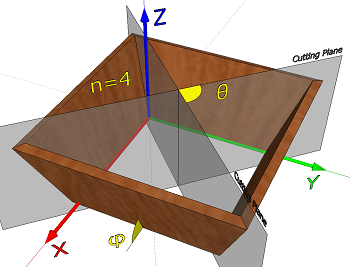 The assembled box is sitting with its inside bottom edge on the XY-plane, oriented such that one side is parallel with the Y-axis. That side's inside bottom corner is at the origin.

Two inputs define the angles of the box:

From n we can calculate the angle θ which separates the n cutting planes in the XY-plane. 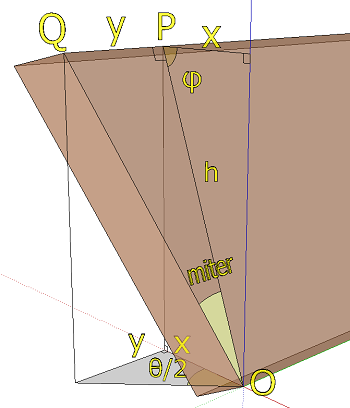 Consider now the one piece that lays on the Y-axis. The triangle OPQ is on the inside surface of the board with sides h and y, and it includes the miter angle. The relationship between y and h is:

The triangle OPQ projected on the XY-plane has angle θ/2 and sides x and y. The relationship between x and y is:

In the XZ-plane the distance OP is the height h of the board, which showed as x in the XY-plane. The relationship between h and x is:

We solve for the miter angle by substituting from the three equations above: 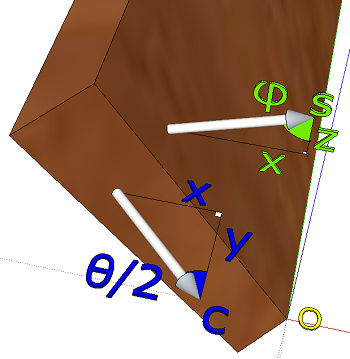 We define a unit surface normal s for the inner surface of the Y-axis piece, pointing into the box. If this side were perpendicular to the bottom then its normal would have the xyz-components <1, 0, 0>, but since the side is tilted outward by an angle φ w.r.t. horizontal, its components are really this:

The cutting plane that includes the Origin has a unit normal c with the following components:

We can find the angle β between the side surface and the cutting plane, which is the same as the angle between their normals. We find β using the geometric definition of the dot product:

The bevel angle is the complement to β.