The motivation for this project is to not have to get up early in the morning to let the chickens out of the barn. The motorized chicken door is controlled by a long-range radio remote control that we keep in our bedroom, some 200 feet (60m) from the door. We chose this approach rather than operating the door via a timer or daylight because we want manual control of when the door closes. There are sometimes stragglers out in the barnyard a little after dark.

The door is built from scrap wood and inexpensive, mostly surplus, components. The parts of the door consists of a vertically sliding plywood door, a locking lever, a winch, a counterweight, a pair of limit switches, an electronics box with receiver and relays, and a remote transmitter. 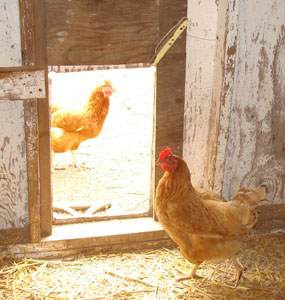 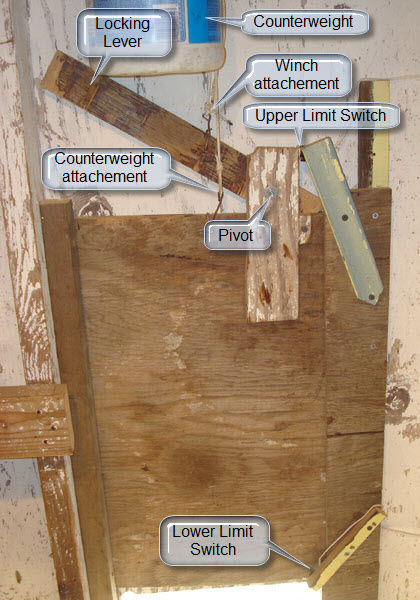 A close-up of the door and its mechanism, shown in the open position.

If someone, a raccoon for example, tries to lift the door directly without lifting the locking lever, then the locking lever pivots down and to the left and contacts the left side stud, thereby blocking the door from further upwards motion. 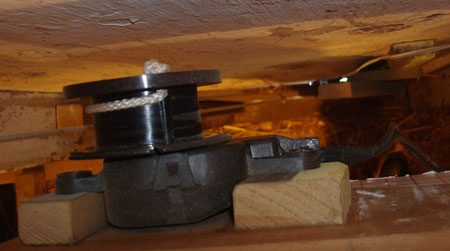 The winch is made from a surplus 12 Volt DC gear head motor designed for operating baffles in an automotive A/C system. In this view we are looking down from above on the winch with its spool, mounted on standoffs on the motor board.

The spool is an empty spool of weed trimmer line. I used a rat-tail file and opened up the bore in the spool until I had a tight interference fit on the splined motor shaft. As I forced the spool on the shaft, the splines cut corresponding splines in the plastic spool. Simple and effective. 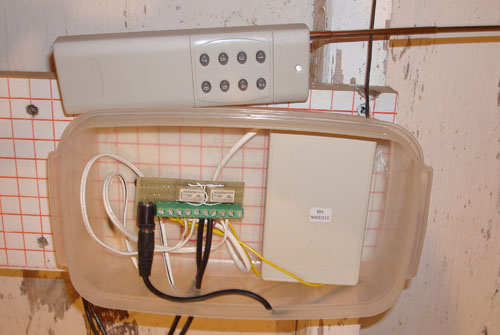 The electronic box is an old Tupperware food container with a tight-fitting lid. The chickens generate an enormous amount of dust and this box protects the electronics from being covered in it.

The long-range remote receiver and transmitter were purchased from Ebay. The remote has eight momentary channels of which we are only using two. The receiver has 8 SPDT relays with one common terminal. I modified the connections to relay 2 to remove its common connection and expose it separately. This is used to prevent trying to run the winch both up and down simultaneously. I have made available a PDF schematic.

A small prototype board holds two DPDT relays† and a terminal block. These relays will latch and hold a command from the receiver, then drop out as the limit swiches are tripped, again see schematic. 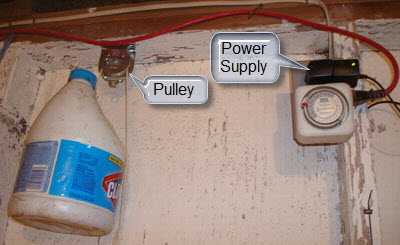 The counterweight is an old one-gallon (3.8L) Clorox bottle, partially filled with water. The weight of the bottle is just less than the weight of the door, so that the door can close by gravity. I experimented with various amounts of water in the bottle until I found a sweet spot where the door closes reliably, yet the motor does not need to work very hard to lift the door. A pulley transfers the downward force of the counterweight to an upward force via a rope, reducing the effective weight of the door.

At the upper right is an inexpensive 12V 1A switching power supply from Ebay. (tip: sort by Price+Shipping: lowest first) Below the power supply is a timer which controls the light inside the chicken's room, which is not related to the door operation.

The door in operation. It takes 50-60 seconds to open or close the door which gives the chickens plenty of time to get out of the way. The remote control starts the winch which runs until the door hits the limit switch at the end of travel.